I heard it and immediately knew what it was…

I love the quiet and stillness of the wee hours, which is why for years my daily routine starts me at 1 or 2am-ish. While meditating or working on my computer, I’ve become very keen to the morning sounds, and lack thereof. A runner jogs by every weekday at the same time. From the 2nd floor window of my home office, I briefly hear the pats of his sneakers hitting the pavement and the jingling of the dog collar of his now obvious running companion. Like clockwork, I come to expect the timed garden sprinklers to start, as my ear is attuned to the thump noise of the water pipe even from a fair distance.

This morning, right about 3am, an unusual sound struck my ears–at least unusual for this area at this time of year. In the total silence, I heard: rat-a-tat tat-tat (space) ta-tatatatatatatat. Hmmm, usually anytime I hear something similar to that, it’s in July or during a few other celebratory times in the summer. I would first think, “Is that..?” Then, “Naw, that’s just firecrackers.”

This morning, though, in December, I knew the ratatats were not fireworks. Oh my! The sound was far off in the distance, yet close enough for it to be distinctive. Then back to the usual silence and my mind goes quickly back to my work–well, kinda. I briefly thought, “Well, if that was what I thought it was, I hope everyone is okay.”

Then, less than five minutes later, a police siren in the distance. “Oh boy, it was what I thought.” Then another minute or so, here comes the helicopter. “Hmm, this really is major. The shooter’s on the loose?” The helicopter sound gets louder as it gets closer, then fades again. You can tell they’re widening their scope. I began praying over that incident–whatever it was.

Well, there’s goes my list of business tasks I was working on this morning, as here comes my raw thoughts pouring forth…

I passed by the TV set the other day and Keidi had some western movie on. Rifles were just-a firin’, and the pointed guns were just-a shootin’. I looked at the fighting for a moment then looked at him and said, “How can you watch that? That is just so barbaric!” Grown, supposedly sensible men shooting at each other like freaking vultures is so inhumane to me!

I used to like westerns–TV shows and movies. My favorite western movie being Tomstone with favorite character, Doc Holliday. But today, I have a hard time relating! Killing people is soooo far removed from my spirit that it’s SICKENING to think of someone having the ability to consciously point ANY weapon, be it knife, gun, car, drone, etc, knowing it has the potential to wipe out a living, breathing being, who was born of this earth with the same God-given right to be here!

I see on social media everyday total strangers judging people on their looks, telling them they are stupid, they’re liars, even calling them names based on something that was posted, without even knowing that person’s personal journey. I see the general public convicting a person in their minds before that person ever has their day in court, just because mass media fed the public the juicy scoop, while withholding the truthful details. Then on the other hand, bodycams, videotapes and other super duper convincing evidence cannot bring about a single justifiable conviction, as long as certain victim’s lives are not perceived to matter.

I turn on the TV and a 2004 Kevin Hart comedy movie called, Soul Plane, is on; portraying blacks as jiggaboos, sex fein s and sophisticated thugs. That’s supposed to be funny? Total degradation of a race of people by our people and we laugh! Place that movie side by side with the 1915 landmark film, Birth of a Nation, and there are frightening similarities! So, we’re outraged with one and not the other? So, we wonder why certain people don’t think our lives matter? Seems to me folks are boycotting the wrong things. Stores and restaurants don’t negatively influence our youth. So, why are folks boycotting them and not the media??
(40 mins later, the helicopter is still heard hovering in the distance.)

I live in a nation so torn and divided by moral values, religious doctrine, spiritual practices, and other standards that people who are supposed to be leaders go around sounding like robots for lack of knowing what else to do. Their certain talking points and beliefs based not so much on respect for another human being but on traditions or associations. Habits–bad habits are birthed out of traditions, you know. Traditions that folks either don’t know the origins of, or haven’t considered new evidence that should cause them to do a 180 from that tradition. A nation fighting for or against an unborn’s life and the right of the expectant, without one iota of personal experience about that which they fight and vote for. I have it, and trust me, it ain’t pretty and it certainly ain’t justified.

I hear people speaking about their diseases, illnesses and surgeries so matter-of-factly. Cutting up flesh; carving out organs; all the slicing and dicing; chemically burning and scraping done under the auspices of healthcare. It has all become so commonplace! That is, until, oops, knife slipped, too many pills, too much radiation, this one didn’t make it. Then everyone’s in an uproar. But if I tell that same patient a scientifically proven nutritional way to rid those same diseases and illness without the “oops” and they look at me like I’m the enemy.  Yep, I’m the coo-coo one from outer space, proposing an achievable goal that would actually require a person to CHANGE.

Well, I am from outer space–a supernatural space. A place where I cannot wrap my brain around the concept that I should judge who deserves to breathe or not breathe based on MY perspective of who they are, where they came from, or what they did–and then use a weapon to back up my judgment. I’m in a place–a spiritual space where I belong to my God, my Creator and you don’t get to judge how I worship Him. I’m in a place where it’s normal to connect with nature and Mother Earth, as I seek out and hear God. I am purposed for Him, anointed by Him, on a journey that can only be confirmed through Him–not through this world or the people in it.

I love life. I love people so much that I would love for them to have life–and yes, have it abundantly so they can enjoy it freely. God judges. I love.
​
May God bless you and may God bless this crazy America!

Day six of our writer’s retreat here in Gallatin, Tennessee and we were blessed with a photo shoot. Several days prior, a professional photographer chanced upon the premises, curious like so many others about this massive 16,000+ square foot home on 30 acres of sprawling greenery. She was given permission by the owner to glance around the property and wasn’t expecting to run into anyone on her little exploration.

Approaching a couple of us at poolside, we struck up a conversation that led to her scheduling us for a complimentary photo shoot. You can only imagine how ideal this turned out for both sides–we get beautiful photos for free; she gets great publicity via this highly sought-after location!

On photo day, this photographer further exemplified the epitome of southern charm–in conversation and style. She wore some fly boots, even nicer than the ones she wore

the first time we met her. Much bling! Boots are her signature.

She had scarves with her. A suitcase full of bright colorful scarves! She brought other props as well, but the scarves impressed me most.

There’s something about a scarf that I never noticed before. A freedom of sorts accompanies this mere square piece of fabric. Is it the vibrant colors that demand attention? Or how about its soft, silky texture that makes it a welcomed addition to almost any wardrobe? Whether for practicality or sophistication, a scarf fits the bill.

During the photo shoot, we wrapped the fabric around our necks and shoulders. We ran across the meadow, letting it pose as wings behind us (or, as in my clumsy moment, letting it wrap itself across my face while twirling and prancing).

After the photo shoot, the photographer blessed us each with a scarf to keep. What a generous gesture! Who knew that such a gesture would cause me to think so “deeply” about scarves? I mean, they’ve been hanging around me (haha, pun intended) for decades without fanfare–just serving their purpose.

The scarf’s versatility is amazing when you really stop to think about it. In fact, because I am stopping and thinking about it, let me share with you several of the many uses it has…

Running with a scarf in the wind. Don’t know that I’ve ever done that before in my life. How fun!

Put a scarf on today. Let it energize and free you! Let the magic of the scarf take you to a new place of appreciation that no other little square piece of fabric could possibly do. 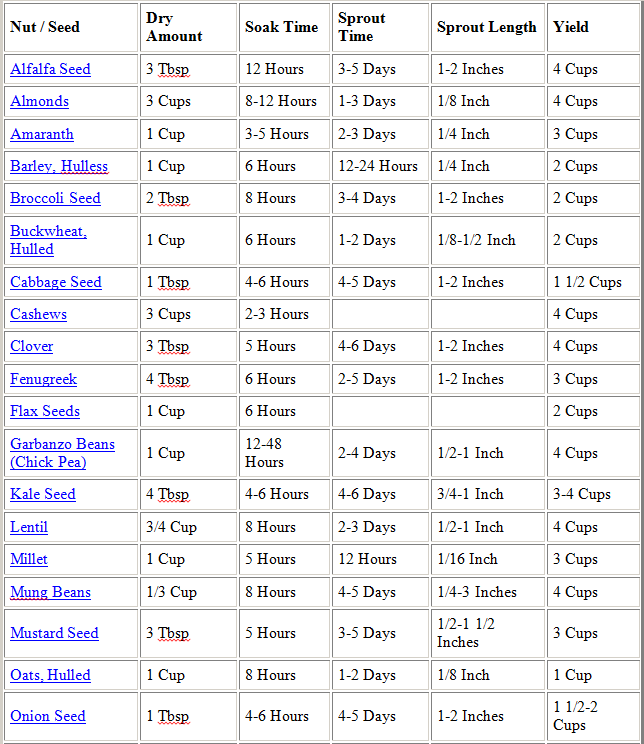 Simple instructions for sprouting and soaking nuts and seeds

This article is re-posted compliments of: Raw-Food-Living.com

The main reason soaking nuts and seeds is so important is because they contain enzyme inhibitors.

The purpose of these enzyme inhibitors is to protect the nut or seed until it has what it needs for growing.

Nature allowed the inhibitors and toxic substances to be easily removed when the conditions (enough rain and sun) were met.

In nature, when it rains the nut gets enough moisture so it can germinate and produce a plant. The plant then continues to grow with the sunlight.

By soaking nuts and seeds, you release these toxic enzyme inhibitors AND increase the life and vitality contained within them!

The Benefits of Soaking Nuts and Seeds

Soaking times vary with the nut. Generally the more dense the nut, the longer the soaking time. Ideally, soaking should be done at room temperature.


The soak water will contain the enzyme inhibitors which is very acidic to the body so make sure to rinse your nuts and seeds well.


Make sure you drain the jar well. Seeds
that sit in water can spoil the whole jar!


After the final rinse, let the sprouts dry completely! They should be dry to the touch. This is very important! Refrigerated produce dies quickly.

The sprouts can then be stored in the refrigerator for up to 6 weeks.

Below is a soaking and sprouting chart for almost of the nuts that you’ll ever use in your raw meals. 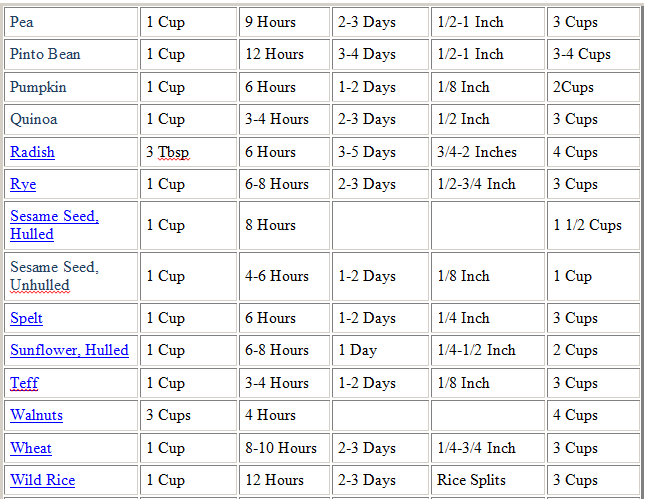 Terri Eileen Liggins is an Author, Writerpreneur and Wellness Advocate whose primary focus is helping baby boomers and others Reach And Win (RAW) their ultimate 4th quarter living. She is also Founder and Publisher at The Literary Front Publishing Company and Founder at The Law Of Raw Institute for Balanced Healthy Living.